It seems to happen more often, nowadays: people getting fired for something they posted on social media. Many seem to believe it’s perfectly acceptable to put whatever they choose on their social media networks. After all, what about freedom of speech? As it turns out, tweets and posts aren’t always protected by the First Amendment. Here are a couple of recent and noteworthy cases of employees being terminated for something they posted online.

A Ridgecrest, Calif. Taco Bell employee was fired for posting a picture of himself at work, licking a stack of taco shells. (Photo here.) Obviously, the picture was probably intended as a joke amongst co-workers; however, his eventual termination definitely wasn’t funny. In fact, not only did the employee in the picture get fired, but the coworker that snapped the photo was also let go. As it turns out, customers don’t really care for an extra coating of spit with their tacos. Go figure.

Matt Watson, former barista at All City Coffee. Do you ever wonder what it’s like to be a barista and deal with the constant barrage of finicky customers desperate for a cup of joe made to their ridiculous specifications? Well, if you follow Matt Watson’s anonymous Twitter account, The Bitter Barista, then you’ve already seen gems like these:

“If you remind me four times that you’ve ordered decaf, guess what you won’t be getting.“

“My only goal for the month is to figure out how to pour a picture of a middle finger in latte art.“

The account became popular, and Matt Watson was eventually terminated for his entertaining (and sometimes true) rants. Be sure to be kind when you order coffee, or else you might find a special piece of latte art to remind you.

Chelsea Welch, former Applebee’s server. Welch was let go for posting a picture of a note one of her customer’s left on a receipt stating, “I give God 10 percent. Why do you get 18?” Needless to say, the customer, Pastor Alois Bell of a 15-member church in St. Louis, did not leave the 18 percent gratuity that is customary for parties of eight or more, despite Bell’s party exceeding eight people.

Applebee’s claimed that Welch violated the privacy of the customer in posting the picture online, and terminated her employment. Pastor Alois Bell, who initially demanded that every server be fired from that Applebee’s location, ended up submitting an apology in an interview with The Smoking Gun stating, “My heart is really broken […] I’ve brought embarrassment to my church and ministry.” (Photo here.)

Lindsey Stone, former employee of LIFE (Living Independent Forever), and her supervisor. Stone, who worked for LIFE, a nonprofit organization based in Cape Cod that assists adults with learning disabilities, snapped a picture of her “disrespecting” the Tomb of the Unknown Soldier while on a work-related trip to Arlington National Cemetery. (Photo here.) The picture eventually made its way into the hands of her employer, which stated:

“We wish to announce that the two employees recently involved in the Arlington Cemetery incident are no longer employees of LIFE. Again, we deeply regret any disrespect to members of the military and their families. The incident and publicity has been very upsetting to the learning disabled population we serve. To protect our residents, any comments, however well-intentioned, will be deleted. We appreciate your concern and understanding as we focus on the care of our community.” – LIFE

Stone and her former supervisor, who took the incriminating picture, released statements explaining that the two of them were just “challenging authority in general” and didn’t mean any disrespect, but LIFE felt otherwise and fired them both. It’s unfortunate events such as this one that prove that even a joke can be taken completely out of context and viewed as offensive. Beware of how you conduct yourself and what you choose to express while you’re on the clock, because something as simple as having a little fun can cost you a job … or even a career.

Andrew Mason, former CEO of Groupon. If there’s any way to go out with a bang, it’s with a well-put and honest letter from the CEO about why he is really stepping down. Mason tweeted a letter to the company’s employees to inform them of his termination. (Photo here.) Although Mason was not fired because of social media, he sure did use it to his advantage to express his raw feelings about where the company started and where it unfortunately ended up at the time of his departure.

Social media is a powerful tool that can make or break you with the click of a button. Whether you’re employed or seeking employment, it’s important to be aware of how social media impacts your current and future career opportunities. In a recent post, “10 Percent of Young Social Media Users Have Been Rejected for Jobs Because of Posts,” we said, “[o]ne in ten people reported losing out on a job opportunity because representatives of the hiring company found something they didn’t like on the candidate’s social media accounts.” It’s best to use your best judgment when posting content to your online profiles, because you never know who is watching … or who will find out!

Do you have an embarrassing story about being caught with your virtual pants down? Share your story on Twitter or in the comments section below.

Why Your Social Media Obsession Is Good for Your Career [infographic]

To Add or Not Add Your Boss on Social Media? That Is the Question 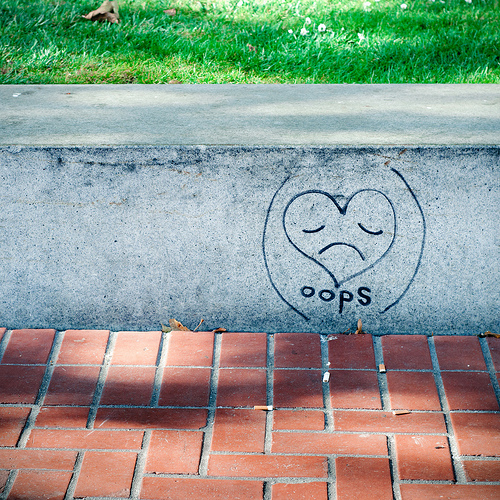