The good news is that the economy has been adding jobs fairly steadily for several years now. The bad news is that many of the occupations projected to grow the most in coming years are low-paying jobs, and guess who will be filling these positions? That’s right: women. Always have, always will – if something doesn’t change. We’ll take a look at why women end up in low-wage occupations and how this phenomenon, known as the occupation gap, is contributing to the gender pay gap.

I would, first, like to point out that just because a job doesn’t pay well, doesn’t mean it has a low impact on the world – because, oftentimes, it’s quite the opposite. In fact, many low-paying jobs play crucial roles in our society, like a majority of these 10 fast-growing, low-wage jobs that reside in the healthcare industry and are predominantly held by women. The real concern with women dominating low-paying jobs is that it perpetuates the gender pay gap via the occupation gap, and bolsters unconscious bias in the workplace. 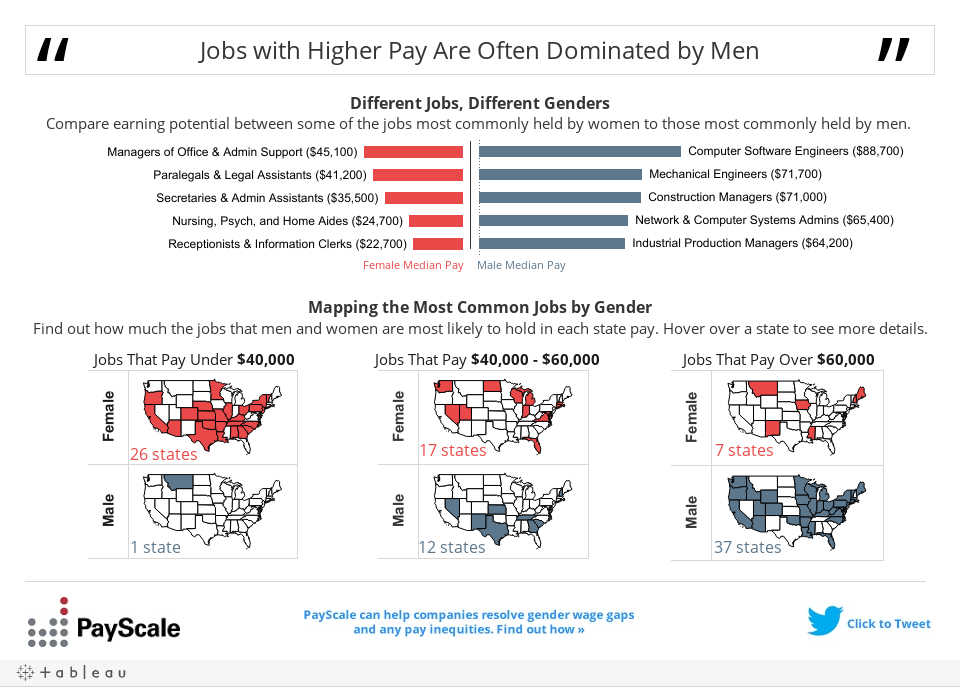 (These five jobs have the worst gender pay gap.)

The “Gaps” Start Early in Childhood

The gender gap starts as early as 5 years old, when children often begin to take on “genderized” chores. In a Highlights study of nearly 850 kids ages 5 to 12, more girls (73.3 percent) than boys (65.3 percent) were assigned household chores.

Additional research found that for every hour a girl spends on chores, boys spend only 45 minutes – and the chores differed as well. Boys were more likely to do common household chores like cleaning and tidying up, while girls were expected to help with said “boy” chores plus care for pets and help out in the kitchen with meals, etc. Here’s the kicker: despite girls doing more household chores on average than boys, it is the boys who are more likely to get an allowance.

The pay and occupation gaps persist throughout a woman’s collegiate and professional career, regardless of her education or experience level. In fact, the pay gap worsens the higher a woman climbs up the corporate ladder, which is probably one reason why we see so few women executives and leaders in the working world today.

Even in college, women are being discouraged from pursuing careers in male-dominant careers (e.g. STEM careers), which are usually prestigious and high-paying careers, and stick to careers that allow them the type of flexibility they need when (not if) they become mothers and need to raise their children. Men are encouraged to pursue high-status, high-paying careers that typically don’t ever get muddied with the “family-friendly” concerns. Why is this?

What Needs to be Done

Part of the problem is that working women are still doing a great deal of the household responsibilities, despite holding down full-time careers like their husbands. However, because women are typically the ones who aren’t the breadwinners, their careers are deemed more disposable and their time more flexible.

It’s for reasons like these that many women are forced to leave the workforce to take care of children or elderly family members – because someone has to do it, and Dad sure can’t quit his high-paying job, so the burden usually falls on Mom. What ends up happening is that working women become devalued in the workplace because their careers aren’t perceived to be as important or vital as their husbands’ careers.

Therefore, we as individuals need to become more aware of bias, even the biases we hold against ourselves. As women, we need to stop undervaluing our position in the workplace and in the home and start owning our successes, rather than being ashamed or coy about them. Men, try to be more open and aware to the realities of the gender pay gap, unconscious bias, and other discriminatory factors that affect the women you know, love, and with whom you work. You’d be surprised how much some support can mean to a woman who’s fighting against the odds in her career.

We all can do our part, especially for the younger generations of girls and boys dreaming of becoming astronauts, doctors, lawyers, engineers, fashion designers, and more. Just as toys, games, cars, and the like shouldn’t be tailored to one gender or another, careers shouldn’t either.