Written by Kat Boogaard for The Muse

Think about the last time you were in a meeting.

The conversation was being bounced back and forth like a ping-pong ball—with different people sharing their opinions on a particular subject.

What did you do?

If you’re like most of us, you jumped in with your own two cents in order to appear interested and engaged in what was happening—regardless of whether or not the discussion carried any importance or relevance for you personally.

It seems strange, doesn’t it? When we’re all constantly encouraged to make our voices heard, the notion that you could just sit back and listen instead of being an active participant in that heated debate is completely foreign. 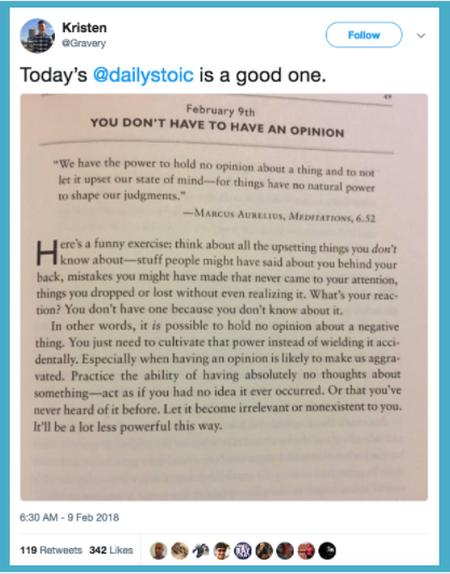 While the passage deals mostly with coping with the negative things that occur in your life, I think there’s a far more powerful message in this: You don’t always have to have an opinion.

That’s right—when things don’t bear a lot of significance for you, it’s more than OK to not have anything to say. It’s permissible for you to be totally neutral in your perception of their impacts or to not want to entertain a discussion about them at all.

And it’s so tempting to think that you always have to have your own strong stance—that failing to voice your own heartfelt viewpoint immediately qualifies you as uninspired, uninformed, or maybe even complacent.

It’s impossible for you to be knowledgeable and passionate about every single subject that arises. And, if you’re neither of those things, ultimately what’s the point of speaking up anyway?

But, here’s the thing: That’s not true. You’re allowed to not have a strong leaning either way. After all, it’s impossible for you to be knowledgeable and passionate about every single subject that arises. And, if you’re neither of those things, ultimately what’s the point of speaking up anyway?

So, no. Maybe you don’t want to take sides in that disagreement between your two coworkers—because you don’t feel strongly about either of their arguments. Perhaps you don’t have anything to add that hasn’t already been said in that team meeting. Or, maybe you truly don’t care whether or not they switch to off-brand coffee in the break room.

Remember this: That’s fine. You don’t always have to contribute. No really, your words will have much more of an impact if you weigh in when you care (and stay quiet when you don’t).

TELL US WHAT YOU THINK

Do you feel pressured to always voice an opinion at work? Are there any that were left off this list? Tell us your thoughts in the comments or join the conversation on Twitter.