One of the more heartening findings in PayScale’s recent report, Inside the Gender Pay Gap, is that both women and men say they’re more likely to leave their job when their employer doesn’t prioritize pay equity. Bottom line: when companies don’t care about closing the gender pay gap, employees leave. For this reason, it’s obviously in your boss’s — and your employer’s — best interests to pay attention.

For PayScale’s latest report, workers were asked to rate their employer’s activity in addressing gender inequity in the workplace, with 1 equaling “no action is taken” and 5 equaling “my employer is proactively addressing the issue.” 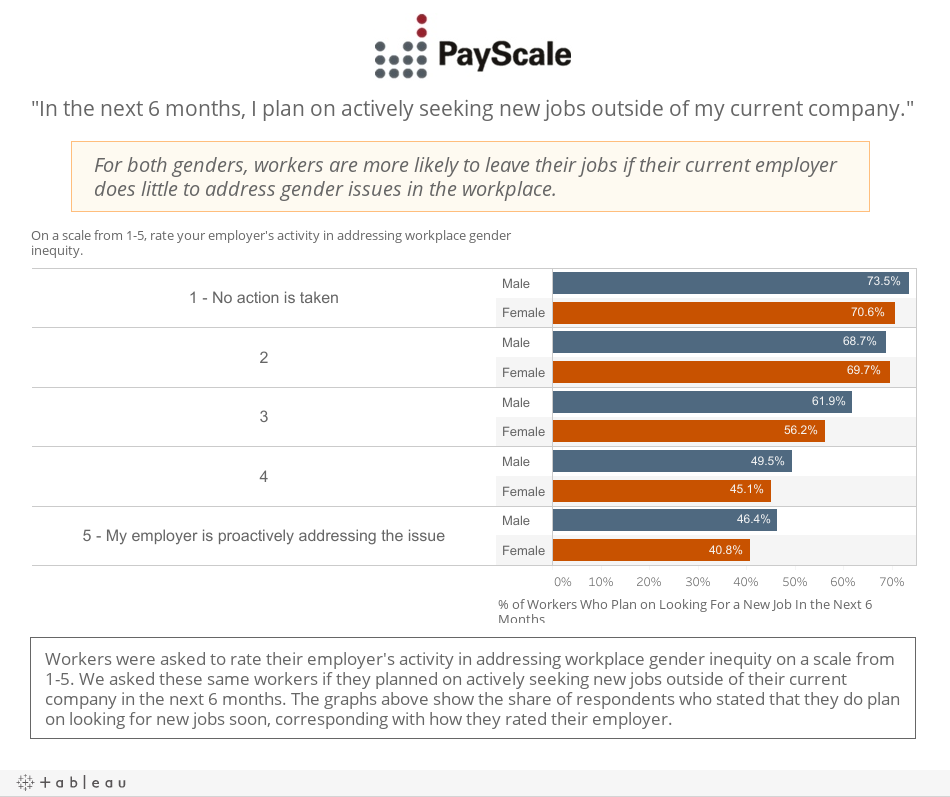 When employers proactively addressed issues of inequity, both men and women reported themselves less likely to look for new jobs in the near future. Again, men were more likely than women to say they were looking for work, at 46.4 percent compared to 40.8 percent of women.

The best news for employers is that making a good faith effort to address inequity appears to make a positive impression on workers, even when things aren’t perfect just yet. Men and women who said their workplace had no gender inequity issues were also likely to report themselves as being extremely satisfied (54 percent of men; 56 percent of women) — but less so than those who worked for companies that had gender inequity and tried to address it.

So, the big takeaway for your employer is that trying to improve gender inequity in terms of pay and promotions will yield big dividends in terms of your loyalty and engagement. They don’t need to be perfect; they just need to commit to making progress.

Does your employer address gender inequity at your company — and does their approach affect your engagement at work? We want to hear from you. Tell us your thoughts in the comments or join the conversation on Twitter.