STEM jobs are on the rise and some of the highest paying jobs in today’s market. Still, women are not going into the industry at nearly the same rate as men. In 2014, just 18 percent of female students majored in computer science. That’s actually down from 35 percent in 1985. So, despite all of the opportunities and growth in the industry, why are so many women leaving tech, or just not going into it in the first place?

Here are a few potential explanations:

There are cultural reasons for the fact that there are fewer women in tech. Unconscious bias is, well, unconscious, which means that we’re not aware of it — but it still affects us.

“One of the challenges in that time [the 1980s] that started to happen is that we started to market the personal computer to our boys,” said U.S. Chief Technology Officer Megan Smith in a recent interview with Yahoo Finance. “We’ve grown up with this idea that the boys do this and the girls don’t. Seventy percent of high school computer science teachers think that boys are better than the girls, even though it’s not true. So one piece is culture and media and helping Hollywood get out of this unconscious bias.”

Another contributing factor here might be the culture of many tech companies. About 40 percent of people, male and female, choose to leave the industry. Clearly something is amiss. Other research supports this idea. For example, many STEM-educated professions choose to work in other industries. Industry and company culture may influence the rate of women entering the field.

A study conducted by the Society of Women Engineers found that both men and women note the same challenges of working in tech. But, women appear more likely to change course and opt out of the industry as a result of those feelings than men are. Perhaps this is because the challenges of working in the industry are compounded with so many other factors.

“Women are not interested in being painted as victims,” Beth A. Michaels, who is the president of the consulting firm that did the study, Primer Michaels, told U.S. News & World Report. “That’s why accountability is so resonant. It’s saying, ‘You do your part and I’ll do my part. And if you’re not going to do your part, then I will fight the good fight for only so long, and then I’m going to go somewhere else.'”

PayScale’s report, Inside the Gender Pay Gap, shows that the gap between women’s and men’s earnings in tech is smaller than any industry except educational services — if we control for factors like job title, education, and experience. The uncontrolled gender pay gap is much larger, however: 17.7 percent uncontrolled, compared to 0.8 percent controlled. That’s worse than the controlled gap for construction or agriculture. The reason for this uncontrolled gap: more men than women in higher paid executive roles. 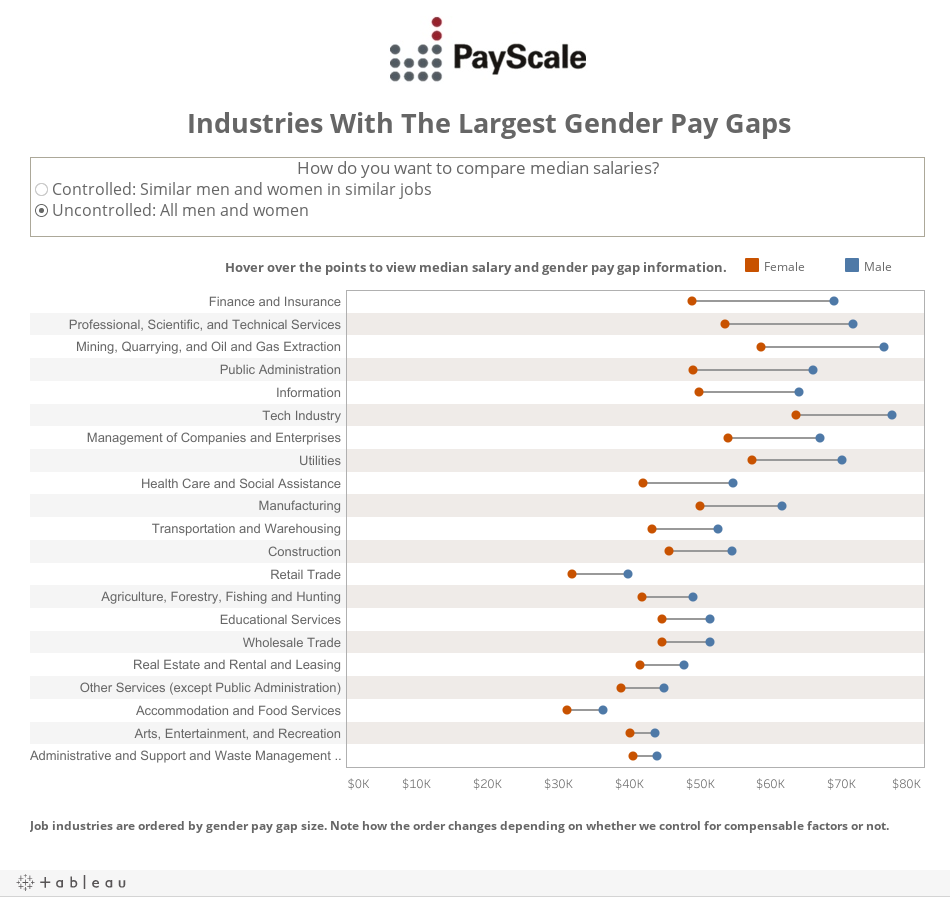 Unconscious bias is one thing, and blatant discrimination is another. You might think that the days of overt sexism in the workplace are behind us, but a new study out of Silicon Valley paints a different picture. Sixty percent of women in Silicon Valley tech said they’d been the recipient of unwanted sexual advances, according to that study. Half of those advances, women said, came from their boss. And, one in three women in tech reported that they’d actually been afraid for their safety because of work-related circumstances.

“From the stories of these women, it’s clear that, really, we’re not talking about unconscious bias or even innocent misunderstandings. These women tell about being excluded from networking events, being groped by the boss, being asked to put up with sexist and demeaning behavior,” wrote Kimberly Weisul, editor at large of Inc. “One client told a woman she could sit on his lap if she wanted him to buy her products. Another woman spoke about attending a conference for portfolio companies of a certain VC firm, when everyone was told to strip down to their underwear and jump in a lake. The guys were all game. For the women, the incident was ‘devastating.'”

In order to solve a problem, you have to get real about the fact that you have one in the first place. Women in tech face challenges so trying, they often opt out of the industry despite their experience, training, and talent. And, at the end of the day, we all pay a steep price for that loss.

Why do you think so many women choose other industries over a career in tech? We want to hear from you! Leave a comment or join the discussion on Twitter.

Lately this has become a big issue and everyone wants to be the one to nail the reason why. Play any MMORPG game and you will see EXACTLY why. you don’t have to look further than that. I have been a programmer for many years and I could write a book on the subject of why there are not more women in the field. Why, in the South, do people in a diner filled with White people still turn their… Read more »

Hello Gina. Great article. My mom was a computer programmer back in the 70s thru 90s. Our very first computer was a Commodore. She would bring my sister and I programming books to create games and calculators. I first studied computer science as an undergrad at the College of Charleston. I really wanted to learn, but I wasn’t focused. I changed to business admin and boy was that a waste of time and money. I went back to school for… Read more »