For more than seven years, we at PayScale have been producing in-depth reports on the gender pay gap, the most recent of which released in early December. Based on these years of research, we have determined that the gender pay gap is more nuanced than the oft-quoted statistic of 76 cents on the dollar. The typical figure is calculated by comparing all men vs. all women, regardless of what jobs they hold, which tend to be very different. It turns out that when you compare earnings for men and women doing the same work, for the same types of organizations, with the same educational background, the gender pay gap shrinks and is closer to 98 cents on the dollar. For those stats people out there, this difference is within errors of parity.

Not only does the gender pay gap increase the higher one moves up the corporate ladder, but so too does the proportion of men holding these positions. In our database, which is skewed toward white-collar professionals, 55 percent of individual contributors are women, but only 35 percent of executives (vice presidents and above) are women. 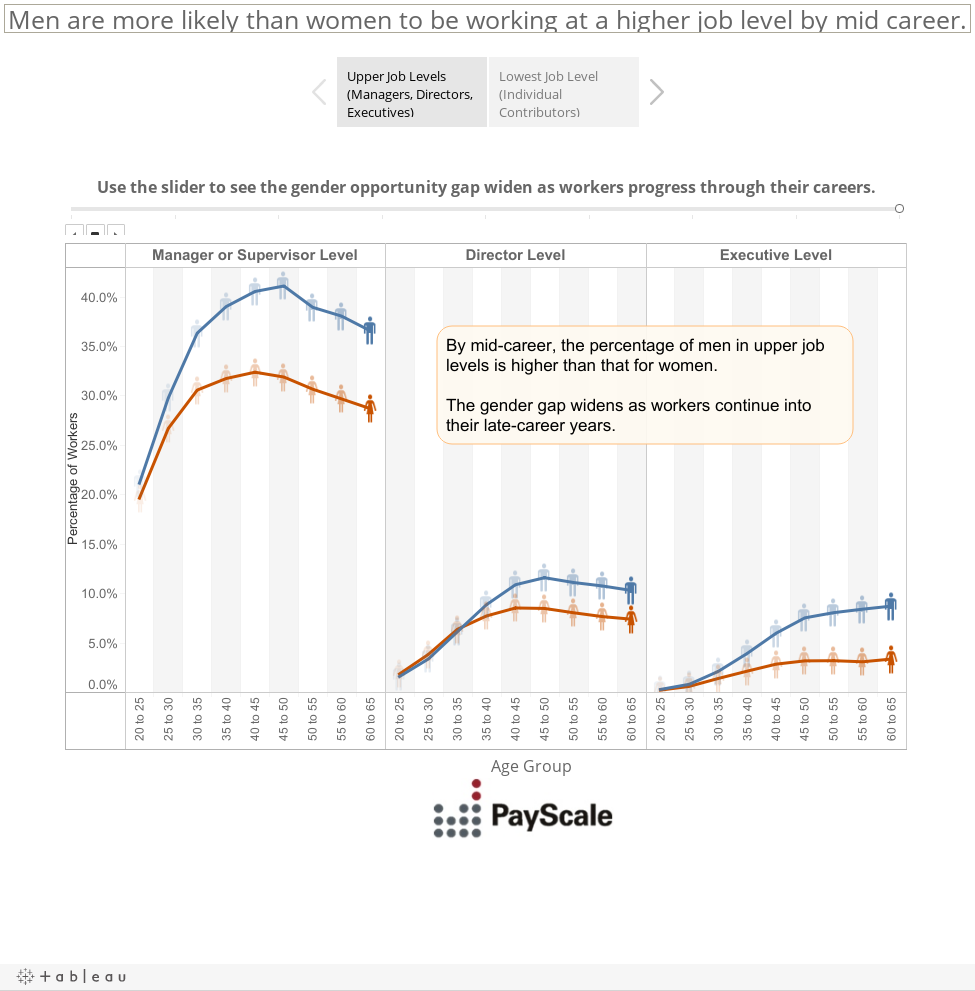 And it’s not just in our data where we observe the lack of women in higher level positions. Catalyst, a non-profit organization looking to accelerate progress for women in the workplace, found that only 4.6 percent of CEOs of S&P 500 companies are women. In fact, there are more CEOs named John in the S&P 500 than there are women. As another example, LeanIn.org in partnership with McKinsey & company found men are 30 percent more likely than women to be promoted to management roles in their Women in the Workplace report, which included results from 34,000 employees and 132 companies employing 4.6 million workers.

Gender Has a Significant Impact on Negotiation Success

One of the reasons often cited for the gender pay gap is women’s inability to successfully negotiate for raises. Previous research stated that women simply didn’t negotiate as much as men, but that has largely been determined to be untrue. For example, the Women in the Workplace report found that women and men negotiated for both promotions and raises at similar rates. In fact, women asked slightly more than men in both cases. Therefore, the problem doesn’t appear to be not asking, it appears to be how this asking is received.

In this same study, women more frequently reported negative performance feedback after asking (30 percent vs. 23 percent for men). Another study out of the U.K. shared similar results: women asked just as much as men, but were 25 percent less likely to be successful in obtaining a raise. Lastly, in a study titled …Sometimes It Does Hurt to Ask, authors Bowles, Babcock, and Lai found that women were disproportionately penalized for initiating negotiations, by both men and women.

We decided we also wanted to look into this disconcerting issue. In a survey of more than 87,000 employees we found that women more frequently believe their gender has kept them from receiving a raise or promotion. On average, 18.5 percent of women (versus 3.5 percent of men) felt their gender hampered them. Similar to the gender pay gap, we see that this difference increases with higher job levels. In fact, it nearly doubles: 16 percent of female individual contributors felt this way compared to more than 31 percent of executives.

Given all the information I’ve shared with you above, I want you to have two key takeaways:

Do you think your gender has affected your chance of getting a promotion or a raise? We want to hear from you. Tell us your thoughts in the comments or join the conversation on Twitter.