Earlier this year, Salesforce CEO Marc Benioff told The Huffington Post that he would examine the pay of all 16,000 employees at the cloud computing company, with the ultimate goal of eradicating the gender pay gap at the organization. He anticipated that the process would take a few years. Last week, while addressing the Fortune Global Forum, Benioff announced that his company had closed the gap, at least as far as role-to-role parity is concerned, in just six months. Estimated cost? $3 million dollars.

“We can say we pay women the same that we pay men — we looked at every single salary,” said Benioff.

Fortune reports Salesforce will reveal the details of its salary assessment process in February. In the meantime, a spokesperson declined their request to discuss Benioff’s announcement in detail.

Salesforce’s willingness to cough up millions of dollars in cash to concretely address the gender pay gap is rare, if not unique, in today’s marketplace. In fact, many companies seem to prefer to keep workers in the dark about how their pay stacks up.

While outright demanding that workers keep mum about their salaries is often a violation of the National Labor Relations Act (yes, really!), companies get away with subtly discouraging their employers from discussing dollars and cents with their colleagues. As a result, any pay disparities go unnoticed – and unremedied.

“Pay is the third rail,” Benioff said in his interview with The Huffington Post.

Why Are Women Still Paid Less Than Men?

Lack of salary transparency is only one of many factors that go into keeping men and women’s pay inequitable. PayScale’s latest report, Inside the Gender Pay Gap, isolates a few of these factors, including:

1. “Choice” of Job: Men tend to dominate industries and occupations that earn more, while women dominate those that earn less. There are more male executives and more female administrative assistants, for example.

2. The Higher Women Go, the Less They Earn Compared to Men: And speaking of executives, even when women climb the corporate ladder to the very top, they earn less than men in similar positions. The gender pay gap increases as you go up the org chart.

3. The Marriage Penalty: Who prioritizes life over work? If you said women, you’re wrong. In PayScale’s survey, men reported prioritizing home and family over work more often than women. (Fifty-two percent of men said they prioritize home/family over work at least 1-2 times per month vs. 46 percent of women.) Despite this, married working mothers have the largest pay gap compared with married working fathers. Why? In part, because of…

4. Unconscious Bias: Companies with large gender pay gaps aren’t necessarily run by ogres who are eager to make a buck off of oppressing women. All people act on biases that they’re unaware of having, and those who determine compensation and hire employees are no different. In order to correct the problem of inequitable pay, we all must become aware of our unconscious bias.

A Future Without a Gender Pay Gap 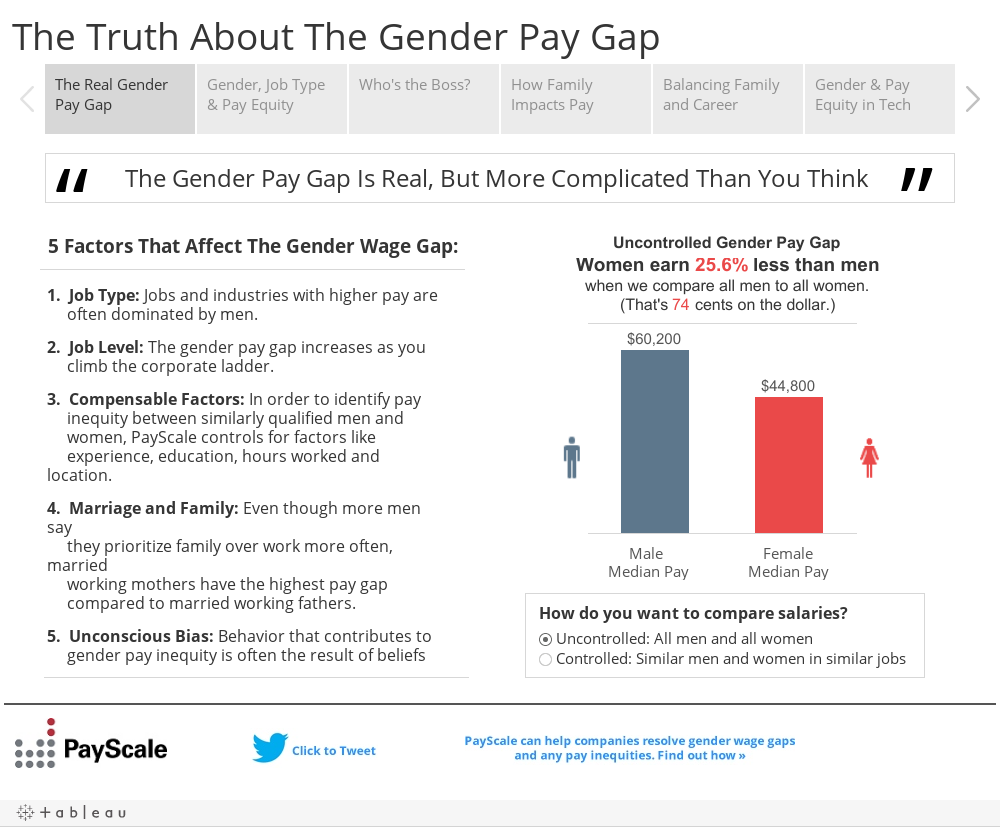 To close the gender pay gap once and for all, we’ll have to attack the problem on multiple fronts, encouraging women to pursue higher-paying occupations, such as STEM jobs, addressing the problem of affordable child care so that women can continue to prioritize their work, and confronting unconscious bias that allows decision-makers to underpay female employees, often without even knowing it.

In solving that piece of the puzzle, Salesforce’s decision is more important than just one company’s choice to do right by their employees. When they reveal their findings in February, we’ll all learn something about how pay inequities come to exist, and how we can even the playing field.

How would you solve the gender pay gap? We want to hear from you! Leave a comment or join the discussion on Twitter.