PayScale recently gave readers a look inside some of the coolest offices around the globe. After conducting extensive research and drooling over countless worthy contenders, we narrowed the list to a handful of creative and unusual spaces, including the live orange grove of Google Tel Aviv, the James Bond-esque Cold War bunker offices of Swedish Internet provider, Bahnhof, and the vintage carousel horses at Ogilvy & Mather’s Guanghzou, China outpost. To follow up on our list of incredible office spaces abroad, we compiled the following stateside edition outlining the most unbelievable offices right here in the U. S. of A. (and one in Canada). Prepare for a major case of office envy — the only antidote to which is the solace you can take from knowing how hard it must be to get actual work done in offices this cool.

And the retrofitted fun doesn’t stop with midday meals. According to Adams & Knight, each part of the agency was designed according to a different retro advertising theme, in an effort to help employees remember that “some ‘big ideas’ become classic … and some become, well, just antiques.”

(A view of the Adams & Knight diner from a skylight portal that connects to the agency’s creative department above | Photo: Adams & Knight | Company’s Website)

In addition to the throwback caf, employees have access to a 60-seat surround sound movie theater with a 10-foot screen, and an operational recording studio decorated with vintage radios and microphones.

Other highlights include walls lined with figurines of iconic advertising mascots like Mr. Peanut and the Jolly Green Giant, and a creative brainstorming area fittingly designed around the theme of “fuel.”

Located a stone’s throw from the hiking and biking trail-laden Lady Bird Lake in downtown Austin, travel company HomeAway’s four-story, 114,000-square-foot headquarters are themed around the concept of “vacation.” Though seemingly counterintuitive to a productive work environment, the escapist digs make perfect sense given HomeAway’s focus on international vacation rentals.

Other features of the Gold-level LEED-certified space include a private gym, sit-to-stand desks, a retro arcade, an open-space kitchen with Ping Pong and shuffleboard, and a spacious rooftop with a grill and fireplace set against sweeping views of the Austin skyline.

Though it already owns bragging rights to housing the tallest flagpole in the U.S. (400 feet), the coolest thing about Acuity, a Wisconsin-based insurance company widely reputed for its pro-employee culture, doesn’t actually exist yet.

Upon completion of its 240,000-square-foot, $130M headquarter expansion in 2016, Acuity will also have bragging rights to the world’s only (we assume) office with a life-size Ferris wheel. (Before reading on, this is a great time for a brief pause to acknowledge the delightful irony of an insurance company commissioning a massive, inherently liability-laden carnival ride onsite.)

The impetus for the 65-foot structure was a 2012 carnival-themed company fundraiser, for which Acuity commissioned a (temporary) version as a decorative focal point. The wheel was such a hit (the event raised $250,000 for a local medical center’s natal intensive care unit), that Acuity decided to get a permanent version as a way to illustrate community giving as a priority.

As CEO Ben Salzmann told the Milwaukee Journal Sentinel in 2013, “One of the things Acuity tries to do for our employees, for our insureds, for the community, for charities, is just be a rallying point.”

“Having a Ferris wheel will be a constant reminder that Acuity is not your typical insurance company,” added VP Sheri Murphy.

The only drawback to a life-size carnival ride at work? While the ferris wheel decidedly affords Acuity cool office status, its not technically intended for the employees themselves, but rather as a showpiece for future events, according to the Journal Sentinel. For the sake of the Acuity workforce, we hope management reconsiders.

The massive Toronto headquarters for Canadian media and entertainment giant Corus Entertainment are encased within eight floors of a wacky $160M building perched atop a 2.5-acre site on the Toronto waterfront.

In addition to lakeside inspiration stations, employees can do their inter-office commuting by catapulting down a curly three-story slide, or take an indoor nature break at a two-sided, multi-story, 1,130 square-foot living wall biofilter that purifies the air.

Other examples of the design’s focus on relationships between nature, technology and communal space include multiple large-scale art installations by British artists Troika, including a school of 467 computer-controlled iridescent fish that “liquefy” a corridor ceiling, a simulated rain shower created with 28 light fixtures that pays homage to Isaac Newton’s rainbow, and a glowing 40-foot tall lightning bolt made of 35,000 LED lights suspended over an atrium.

Aside from the formidable indoor play structure, artistic wizardry, and luscious indoor plant life, one of Corus’s most impressive characteristics is an overall technological infrastructure that allows the company to create and produce multimedia content on multiple platforms.

The Siemens-designed system is befitting of a broadcast giant like Corus, which, along with a 1,100-person workforce, houses 74 television feeds, three radio stations, and a fully operational production, broadcast and distribution center.

In order to give the technology center stage, exterior architect Diamond Schmitt went for “restraint, minimalism and simplicity” through a design composed of a “series of geometries with upper floors set back and a large glazed atrium that drives daylight deep inside.”

Constructed for $5M over an 18-month period in 2006, Inventionland’s 61,000-square-foot Pittsburgh-based “idea incubator” may not be new, but it’s by far one of the coolest office spaces in the country (and possibly the world).

Dubbed “America’s largest invention factory,” Inventionland produces thousands of consumer products for corporations, retailers, and other inventors around the world every year. In addition to invention and design, the 26-year-old company also handles all aspects of prototyping, engineering, packaging, licensing, and patenting.

The Inventionland employees, or “creationeers,” tasked with envisioning and then executing the products into existence have office digs befitting of the imagination-stretching requirements of their jobs, both of which are also reflected in the company motto: “The best work comes out of the spirit of play.”

The legion of lab coat-wearing modern-day oompa loompas do their inventing from sixteen different inspiration stations, or “themed sets,” each of which is designed to reflect the types of projects it’s intended to inspire.

They include, among others: a fake cave; a shipwrecked pirate ship (complete with a shark and treasure chest); a “pet shack”; an oversized shoe; a boulder-sized cupcake sprinkled with lollipops and gumdrops; a gigantic robot; a functional treehouse; and a castle outfitted with turrets and a drawbridge. Linking the sets together are grass paths set against a backdrop of faux trees and butterflies and three running waterfalls. 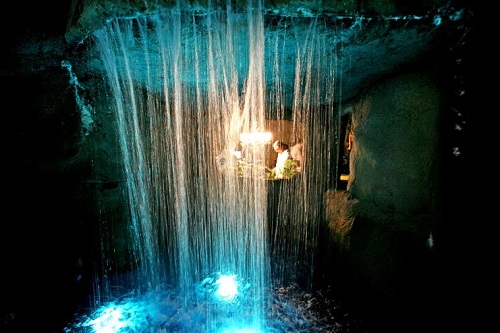 Want more? Here’s a more detailed look at some of the sets: 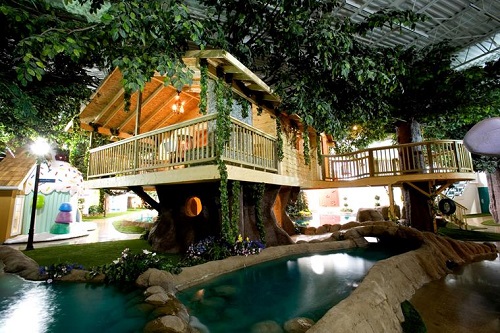 “Davy’s Treehouse” – A dreamy yet fully functional tree house supported by a steel, wood, and resin-trunk that sprouts silk leaf-adorned branches repurposed from actual trees. The treehouse serves as the office for Inventionland CEO George Davison, who spent the ’60s and ’70s in a treehouse in Oakmont, Pennsylvania “dreaming of doing something unique with his life,” according to the Pittsburgh Tribune-Review. (He clearly succeeded).

“Nursery Nook” – A station designated to inspire create toys, books, and other children’s products. It also “doubles as the world’s largest crib,” where tired employees can rest.

“Inventalot Castle” – A King Arthur-inspired moat and round table, where groups of designers and inventors gather to brainstorm and debrief.

In addition to the whimsical workstations, the space has a red carpet in the back of the building that leads to an audio, video, and animation studio with “one of the largest green screens in the tri-state area,” according to the company.

Inventionland also houses a production facility equipped for metalworking, woodworking, molding, laser cutting, prototyping, circuit board construction, and other functions that the creationeers utilize for prototyping and engineering the inventions.

For a 360-degree view of Inventionland’s digs, check out the company’s virtual video tour. And if you ever find yourself in Pittsburgh, you can see the office in the flesh by setting up a personal tour.

* Geographical diversity and recency of construction or redesign were taken into consideration but selections were ultimately based on the creativity and originality of the design and/or amenities.

Do you work in an ogle-worthy office? We want to hear from you! Leave a comment or join the discussion on Twitter.