Sometimes stepping into the workplace can be like stepping into the Twilight Zone. We’ll take a look at five types of co-workers that not only annoy the living daylights out of you, but also rid your workday of its productivity and fun. 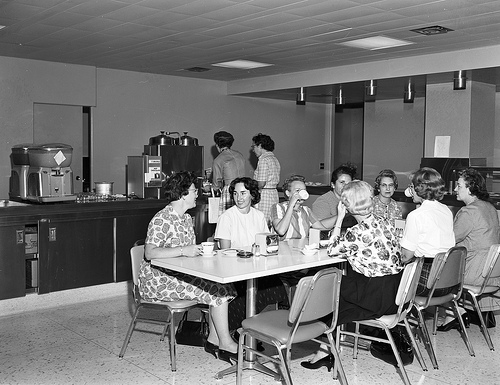 1. Debbie Downer – “Nobody likes me, everybody hates me.” Poor Debbie Downer, she just can’t get a break, can she? Debbie Downer isn’t shy about her misfortunes either, using every ounce of breath to burst everyone’s bubble.

If a co-worker is having a great day, then it’s ill-advised for him to go running to Debbie Downer to tell her all about it, because she’ll only make him feel sorry for her somehow. Oh, how sweet, the receptionist just had a beautiful little baby girl and she brought her in for everyone to see. Debbie Downer sees this as an ideal opportunity to announce that she has a rare condition that prevents her from experiencing the joy of having kids (and apparently this same condition prevents her from finding any friends, too).

Debbie Downer is on Human Resources’ radar after employees complained that she constantly sulks throughout the office and tears morale to shreds one dose of depression at a time. Debbie Downer better turn that frown upside down if she wants to keep her job.

2. Chatty Cathy – “Here she comes again!” Chatty Cathy takes the “a little birdy told me” concept to a whole other level as she talks your ear off about the latest office gossip and the drama that unfolded on last night’s episode of “Real Housewives.”

Where’s Chatty Cathy, you ask? Well, at any given time, she can be found sitting on just about anyone’s desk fully engrossed in a meaningless conversation about everything but work; then when the boss walks by, she’ll act like the blank sheet of paper in her hand is a top secret work document.

Chatty Cathy seems to also have superhuman cranium powers that allows her to know the “who, what, where, and when” for just about everything. Oh, and she’s always right — and by “always right” we really mean “never ever right.”

It’s amazing how Chatty Cathy gets anything done at work, considering 99.9 percent of her day is wasted on chitter-chattering with co-workers or anyone who will listen. Don’t let Chatty Cathy suck you into the endless abyss of pointless gabbing or else you may become “one of them.” Politely dismiss yourself from any conversation by discretely parkour-ing out of there, STAT!

3. Slick Rick – “Not him again!” Slick Rick is a slimy character that can be heard slithering around the office hunting out vulnerable, unwilling prey on which to feed. He scares the bejesus out of his lady friends at work, who are liable to turn around at any moment to find him leaning over their desks like Michael Jackson in “Smooth Criminal.” He “just wanted to say hi” again.

It’s 110 percent guaranteed on a daily basis that Slick Rick smells like his entire body was dipped in cheap, disgusting cologne and that he used some form of motor oil to slick back his terrible, terrible hair. Ladies, you’re probably used to turning down Slick Rick’s lunch and dinner invitations regularly, because he still doesn’t take the hint when you tell him you’re married and show him the wedding ring that you’ve meticulously placed on your flexed middle finger to get your point across.

Oh, Slick Rick, you better be careful, because you’re teetering dangerously close to getting slapped in the face with a sexual harassment lawsuit by every single female in your office. And a word to the wise, don’t add Slick Rick to any of your social networks because it will only end up in disgust, regret, and massive creepiness.

4. Boozy Suzy – “It’s 5 o’clock somewhere.” No, not when it’s 10 a.m. on Monday. Boozy Suzy can be found mysteriously always stuck in traffic and running late. She’s at least 10 to 15 minutes late to work on a regular basis. She does her makeup in the office bathroom, asks everyone whether they’re going to happy hour after work, and darts out ten minutes early every day.

Boozy Suzy just can’t get enough of her fabulously fun life and blames her “stupid job” for getting in the way of her party time. She screams like a 13-year-old at a Justin Bieber concert when she sees her BFF (more like, best friends for-never) in the break room, and, if that isn’t bad enough, she probably makes more money than you.

Yep, that’s Boozy Suzy. A young, pretty, spunky, 20-something, recent college grad that landed an amazing job because she happened to be well-versed in social media marketing and branding. Go figure.

Boozy Suzy may look awesome at her overpaying new job (that she’s actually good at), but soon enough the realities of partying hard will catch up with her professional life when she commits the ultimate career-ender and accidentally posts a drunken tweet under the company’s Twitter account. Oops! Poor Suzy is not just Boozy any more, she’s also a Doozy.

5. Procrastinating Pete – “If it weren’t for the last minute, nothing would ever get done.” Procrastinating Pete is always cool as a cucumber and never stressed out, until he realizes that the project he’s been putting off for months is due tomorrow. He’s a friendly, well-liked chap that seems to excel in life, but always seems to need a huge favor in the eleventh hour.

Thankfully, Procrastinating Pete’s co-workers can come to his rescue and sacrifice their well-managed time to help him look good for the boss. And do you think Procrastinating Pete’s little helpers will get any credit for their contributions? You guessed it: nope! He will gladly accept the free handout of his colleagues’ time — which they will now have to make up after-hours, while he high-fives the boss on his way out for a job well done.

Steer clear of these five co-workers to save yourself a bit of sanity, time, and productivity during your workday. As the zoo reminds us, “Don’t feed the animals!” Nothing good ever comes from it.

Do you have a Debbie Downer or Chatty Cathy at your workplace? If so, share your story on Twitter or in the comments section below.