In her hotly debated performance at the 2013 MTV Video Music Awards, Miley Cyrus completed her transformation from wholesome child star into future train wreck before our very eyes. But her disturbing and controversial dance number can teach us more than what not to do with a foam finger. Here are five things from Miley Cyrus’s VMA performance that you can learn (and avoid) to further your own career. 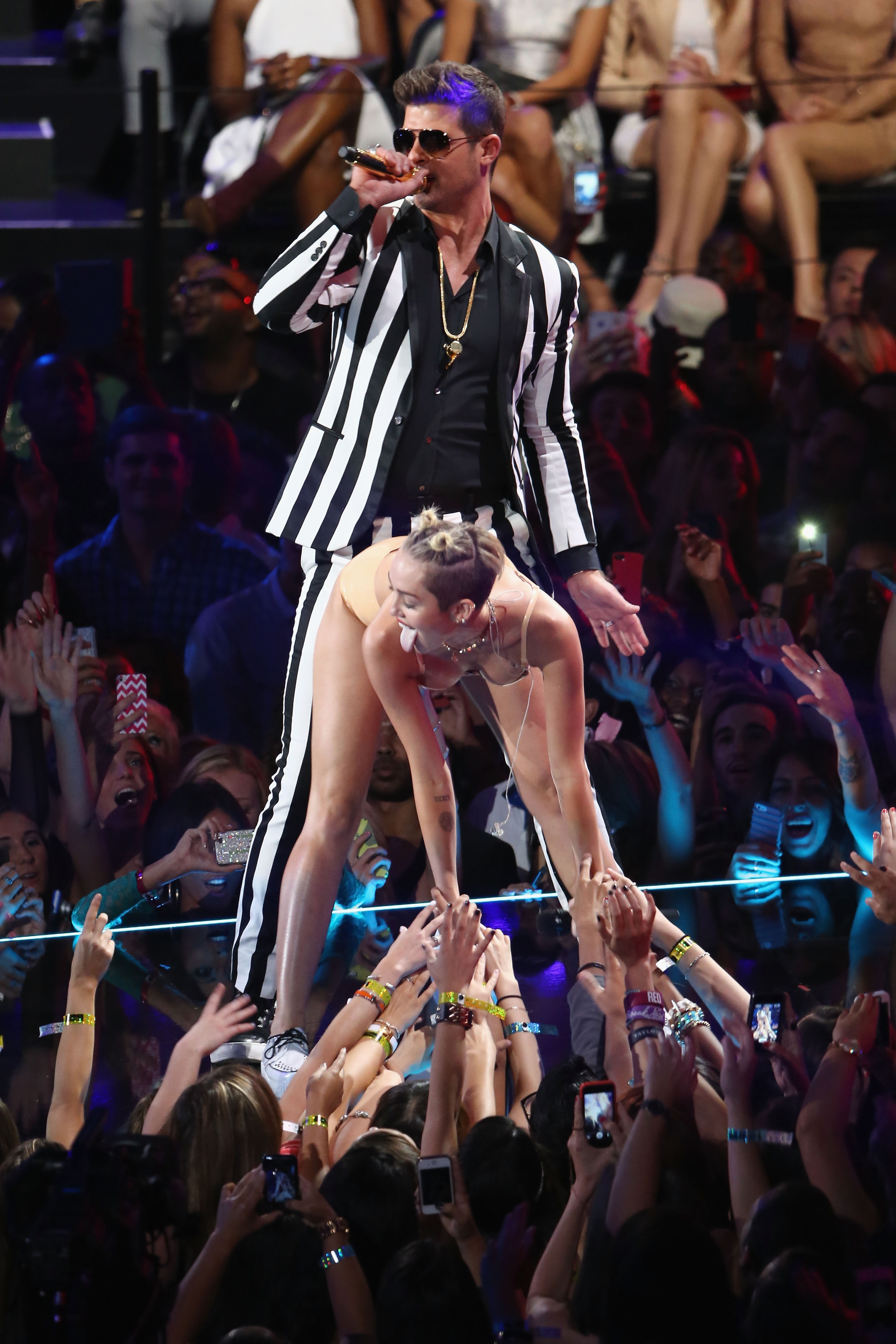 Nude underwear, rampant allusions to drug use and all that twerking may resonate with raucous ravers, but will their parents be as willing to pay for Miley’s new album of club anthems as they were to buy Hannah Montana dolls? For entertainers targeting a younger audience, appealing to parents is the equivalent of staying on the good side of your upper management at work.

In trying to establish a sexier, more mature audience, Miley is wisely leveraging sex appeal. But how many write-ups have you heard since the VMAs praising all the crazy tongue acrobatics? When you’re building a personal brand, play up your strengths, but don’t go overboard.

In theory, doing a duet of another pop hit, “Blurred Lines,” with Robin Thicke sounded like a great idea. But the lack of rehearsal on Miley’s part was painfully obvious, and no amount of writhing on stage could distract from the fact that she hadn’t spent enough time practicing an unfamiliar song. When you’re reinventing yourself at work, do not neglect the importance of practicing the new skill you want to excel at.

Miley Cyrus is actually a pretty great dancer. But after the VMAs, most people just remember her inappropriate use of that foam finger and a nightmarish array of dancing teddy bears. When you want to rebrand your career, resist the urge to bury yourself in flashy props and use the opportunity to showcase your actual skills and strengths.

Miley’s edgier new image may garner a lot of short term press attention, but her long-term success hinges on a group of kids who may be too busy owning the night to have any real purchasing power. In the meantime, she’s received an avalanche of criticism about the lewd and racially insensitive aspects of her flashy performance. When it comes to your own career, clearly define your long term goals and make sure that your intermediary actions won’t have negative long-term consequences.

What did you learn from last night’s VMAs? (Besides the fact that nude vinyl isn’t flattering on anybody.) Leave a comment or join the discussion on Twitter.

4 Ways We Should All Be More Like Kanye West

Never Too Late: A Guide to Changing Careers Mid-Life

Think Outside Your Brand for a Better Career

Choosing a advancement is an whole and central taper in any student’s animation. This may evidence to be a life-changing pick for the pupil, so one has to be rattling deliberate and thorough, piece making a conclusion about how to opt a advancement. For determining on how to prefer a career, there are umteen things to view

The quantity residential, describes the country of HVAC professionals that utilize in peoples’ homes, apartments, condos, etc… Piece mercantile describes the area of the concern that serves power buildings, warehouses, factories, and fortunate, fundamentally everything added.

A knowledge of math can help a biologist, however, just as understanding biology may be useful to mathematicians. Biologists collect large quantities of data about animals, plants or microbes, but they may not have the necessary skills to analyze the data properly.

A knowledge of mathematical processes and see in mathematical rational are obligatory for someone hoping to begin a aggregation occupation that involves maths. Yet, in the personnel maths calculations gift probably be through by machine software. Therefore, in increase to studying math, someone hoping to follow a vocation that combines biology and math also needs to obtain have in using computers.

A knowledge of math can refrain a biologist, notwithstanding, conscionable as apprehension collection may be utilizable to mathematicians. Biologists collect extensive quantities of aggregation nigh animals, plants or microbes, but they may not bang the needful skills to examine the information properly

Whether you’re a younger respective vindicatory deed started in the employed group or you are hunting for a new line, feat your HGV authorization and comely a mercenary truck wood could alteration your beingness forever. And with a saving percent of older drivers getting prepared to diddle within the succeeding few period, status for hedged replacements leave be even greater.

As a qualified nurse you hold opportunities for line development through numerous confirmation or educational programs. So if you’re considering a job in nursing here you can feel dissimilar types of nurses working in the expanse of advanced drill to work you determine if nursing is the honorable line for you.

I was talking to a person yesterday who is staying at her job and waiting for the new constraint to pall. She’s been told that the companionship is reorganizing and she may be out of a job. And many of us are in this condition. Do we necessary to move until we are unemployed? I believe it is outperform to design the vocation we poverty and go for it, kinda than waiting until we are fitting job-hunting to last.

Are you considering a career in the champaign of nursing? It’s a time-honored getting that continues to be one of the fastest ontogeny in-demand jobs across the region. The flexibility, pay, and comfortable reach of opportunities makes nursing a general progress quality. I screw conscionable how elating a job in nursing can be because for the prehistorical 16 age I’ve been a registered nurse with receive in the operative position, neonatal qualifier work unit, pediatrics room, and fight and delivery… Read more »

I think that YOU ALL need to learn from her. She is FREE she is her own
spirit and now she is the most talked about icon. Wakeup and have some
fun and LIVE a little.

Next time Miley sticks her tongue out, somebody should lop it off. She really looks stupid and dumb.  I think she has gone way way psycho.

This is why people shouldn’t do drugs. Period.

The above comments are great!  In addition, it was so sad to see that Miley sought only to shock and get attention for being bad, as in literally bad at her job (no one would mistake her disturbing display as something tantalizingly naughty, so it was not that good kind of “badness”), and she had no interest in even attempting to provide the audience with a performance of any artistic merit.  Guess I’m referencing Lesson #4 – the most important thing should be substance and quality… Read more »

What a mess. Nowadays, just act stupid, look like an idiot, get attention and put a few bucks in the bank.  She should be embarrassed.  She forgot to showcase her singing, seems she did everything but that.  Too bad.

Hope she’s not a train wreck in a few years.

Her performance screamed desperation to move from being a talented wholesome young gal to being a young adult who displays raunchy and classless exhibitions more for the shock value than anything else. I feel her parents pain.  Whoever has her ear is destroying her future in the business. Life is about choices however and she is the one making the choices.  Only when enough people get up and walk out will any impact be made.    At the moment she reminds me of a… Read more »

Miley’s manager mislead this poor young girl. She made

a total fool out of herself. She wants this career more than

anything. What a huge mistake. She went way too far.

The act and her outfit could have geared down a bit.

I understand where she is coming from. Miley messed up.  Big time. Can’t wait to see how she is going to undo

her awful mess she has made of her career.

I am not condoning child abuse or hitting/beating of children, but I think a parental hand to the back-side of the misbehaving child/woman would do a lot of good. She has been manipulative toward her parents and they let her get by. She needs some accountability to them and either treatment (shock might be the answer – just kidding), but she definitely needs a wake-up call. She has just lost any credibility toward the younger generation whose parents give money… Read more »

Her performance struck me as a young woman who was ill prepared and totally winging it onstage.  The props and the costume were horrific.  I hope she is not invited back to perform on any televised awards show until she has established a desire to provide an entertaining performance.  Her performance at the VMA’s appeared pretty well planned out – props, dancers, etc.  So if her plan was to be shocking, props to Miley as it was spot on.  However, shocking isn’t necessarily entertaining and I for one hope to never… Read more »